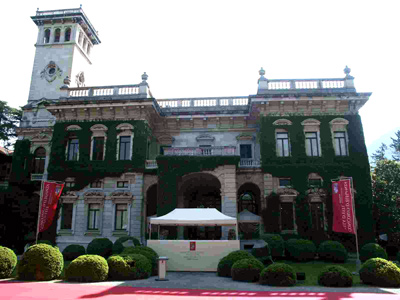 Last night on Italy’s Lake of Como, eighty Barclay’s bankers and clients gathered together in the storied Villa Erba to celebrate with their fiddles as Rome continued burning around them.  And while the paparazzi wary bankers spent two days and 700,000 Euros, the British Prime Minister traveled across Britain to sell his rescue package to hardworking British voters.

The bankers banned the paparazzi, but not the Greco di Tufo wine, ricotta stuffed ravioli, fillet of Brunello, apple pastry and chocolate mousse. Their sacrifice of the evening was to forgo a planned trip to La Scala, ostensibly due to the 13 percent of company value lost that day, but in reality, they wanted to avoid the aggressive paparazzi that would have been free to snap away in front of the legendary opera house.

It wasn’t just a once a year broker-client excursion. Just last week the oblivious bankers enjoyed a week in one of the Cote d’Azur’s finest hotels priced at around three thousand Euros per night.

The fury over the trips has little to do with class envy and everything to do with discretion. Hopefully, these Neros will be awakened to the reality of the global economic inferno, ignited by financial institutions like Barclay’s.