Are Republicans after the Anti-Bush? 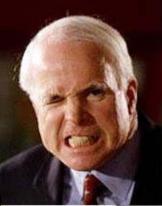 Lost in the analysis of the ever-changing complexion of the Republican primary—more specifically the ascension of John McCain—is why conservatives seem to be bucking conventional wisdom by gravitating toward someone who hasn’t simply bucked party principles but has been the party maverick, the one most likely to appear first under results of a ‘Republican outcast’ Google search.

Some pundits cite a less than stellar field as a rationale for McCain’s popularity, and perhaps they’re right. Others believe it’s his electability, in so much as he might be the only one that can knock off Hillary Clinton. But there is one motivation for the McCain surge not making the editorial roundtables—Bush fatigue. Usually mentioned in connection with Democratic frustration and voter turnout, it’s rarely mentioned as an explanation for McCain’s emergence.

Republicans haven’t forgotten McCain-Feingold or his roguish ‘gang of 14’. They also don’t share his view on immigration. From Zogby:

So obviously, many Republicans are ignoring recent history with regards to McCain, his amnesty proposal and his forever needling of conservatives. Maybe they too want change and are looking for the anti-Bush.

Who better than that Republican who has been most openly critical?