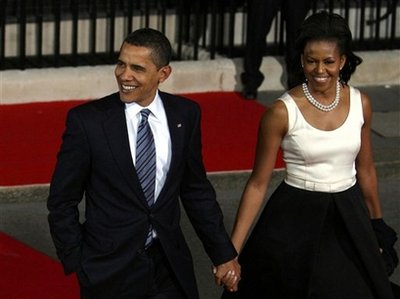 He had them at bonjour. Anarchists and mainstream Europeans lauded the arrival of the ‘anti-Bush’ in London yesterday, as G20 leaders met to coordinate their cure for a crisis whose origins some would prefer to ignore. But not French President Sarkozy who noted Wednesday evening: “The crisis didn’t spontaneously erupt in Europe.”

Aside from the American President’s second questionable diplomatic gift, an iPod presented to the Queen, it’s the diverging opinion on how to solve the crisis making non-English headlines. The French and Germans are strongly opposed to Obama’s push for stimulus. Already overloaded with entitlement spending, they differ philosophically from a President whose budget wouldn’t qualify his country for EU membership.

The nonpartisan CBO contends that President Obama’s budget would incur a debt-to-GDP ration of 5.3 percent for the fiscal years 2010 to 2019. The President’s advisors have argued that his healthcare, education and energy initiatives would increase revenue, thus reducing the unsustainable deficits. But how will going green help spur corporate growth among factories and businesses whose taxes are bound to soar even higher than the tax rates which are some of the highest in the world?

France’s Sarkozy summed up the European opposition best—“We want a capitalism of entrepreneurs, not a capitalism of speculators.” The biggest crisis in a century wasn’t their fault, and although Obama is reticent to place blame, it’s clear and understandable why other leaders are eager to identify the cause. Because without acknowledging what went wrong, why and who is responsible, solving and preventing future disasters become impossible. Unregulated hedge funds and derivatives must be tackled.

According to France’s L’Express, the IMF was a big winner at the G20—its capacity went from $250 billion to $750 billion. In an attempt to demonstrate his concern for the third world, Obama additionally wants the IMF to sell off $20 billion of its gold reserves to help the poor in third world countries. Beyond making a compassionate impression, another motive might have been at play, as his budget calls for taking away charitable deductions from Americans making over $250k. Someone has to pick up the slack for Feed the Children.

Bush bashers were eager to move beyond the cringe-inducing international summits of the past and into an era of change. While non-English speaking Europeans who aren’t keyed into U.S. political minutia continue to be wowed by his smile, presence and remarkable story, foreign leaders and dedicated observers are getting a clearer  picture.