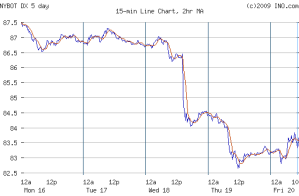 For years, economists, journalists and pundits have been predicting an end to the U.S. dollar as the reserve global currency. And for years, mainstream Americans and politicians have ignored the warning, presuming that the wolf-criers are simply anti-capitalist or anti-American.

But with the Fed’s most recent round of printing $1.2 trillion in ‘quantitative easing’, the only easing going on is the value of the dollar. To battle deflation, low housing prices and a crippled credit market, the Federal Reserve’s bold action will perhaps prove effective, but in the long-term might also prove the impetus to cede America’s leading superpower status.

America’s sugar daddy has already cautioned against the mind numbing spending spree taking place on Capitol Hill and the White House. They’ve slipped the hint—there are limits to their generosity. As long as their investments prove profitable, China will remain our loan sharks, but the minute the spending and printing begin bringing down their balance sheets, they will walk away. And so will the world.

Not only China has voiced concern, next week another ally plans to recommend ditching the green-back—the UN. Russia has been on the ‘ditch to dollar’ bandwagon for years and has kept up the rhetoric this week by calling for a global supercurrency.

Currency specialist Avinash Persaud, a member of the panel of experts, told a Reuters Funds Summit in Luxembourg that the proposal was to create something like the old Ecu, or European currency unit, that was a hard-traded, weighted basket.

Persaud said that the United States was concerned that holding the reserve currency made it impossible to run policy, while the rest of world was also unhappy with the generally declining dollar.

“There is a moment that can be grasped for change,” he said.

“Today the Americans complain that when the world wants to save, it means a deficit. A shared (reserve) would reduce the possibility of global imbalances.”

What would the United States economy look like without the supremacy of the dollar? Hopefully, we will never know…